Serving time for protesting the pipeline

Sentenced to 14 days for blocking the road to the Kinder Morgan facility. A symbolic gesture because the trucks used a 2nd entrance. There were 5 of us arrested on August 20, 2018, all seniors except for one young woman. We sat on folding chairs on an empty road. My 14-day sentence was reduced to 9, served over 1 day and 3 weekends. 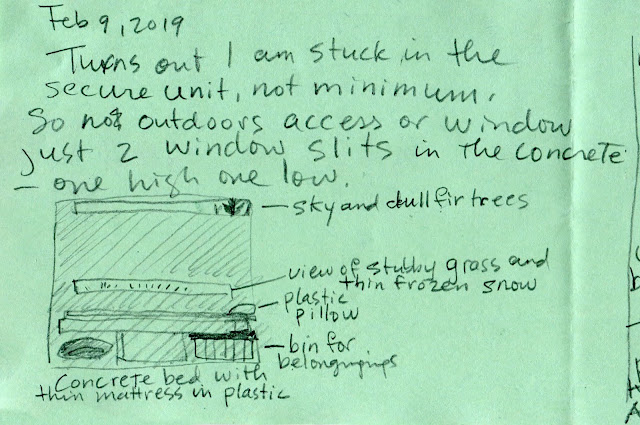 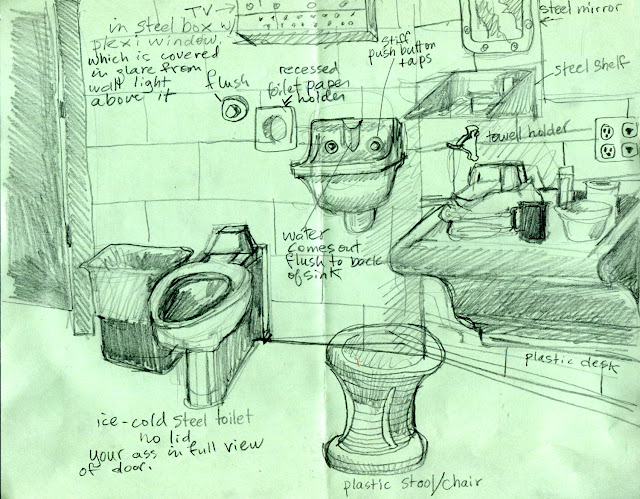 Friday night was very long and depressing. Lips and hands so dry it hurt. Thin mattress on concrete bench very hard on my hips. Woke up every hour to switch sides but still face the wall. Light is on all night, but there's 2 brightnesses: one dim, one bright. The dim is still too light for sleeping, so face the wall.

My supper: first they brought me a frozen chunk of meat and mashed potato with gravy. When I told them I was vegan, they took it away and 30 min later brough a frozen plastic tray containing a "stir fry". Some chunks of cabbage and carrot, 3 small cubes of tofu and rice, all mixed together with vaguely Chinese sauce. Shrivelled frozen corn and peas. Cookie, juice in a box.

We spend most of the time locked in our cells and get out for meals in a long line of pushed-together tables. Last night we were free to come and go all evening, so browed the book cart. Pretty awful books. All US blockbusters and romances. But apparently they're changed every week so maybe next weekend will be better. Finally chose Prescription of Death by Perri O'Shaughnessy.

Trying to remember to drink a cup of water every hour to hydrate my skin and bowels. Very hard to poo on an ice-cold steel toilet. Plus I have a hard time pooing when I'm this tense. Am so glad to have my mouth guard with me, even though this one is old and cracked.

Sat Feb 10
They woke us up at 730 am for medication. Most of the women lined up for heroin medication. I was there for my antidepressant which I've been taking for 20 years.

The light in the cell stays on all night. There is a bright and a dim. The mattress is too thin. It lies on a concrete base. My hips are aching. Woke up every hour because of it.

Locked up again after meds until 1030, the weekend time for breakfast. No paper or art supplies. There's a cup of stubby orange pencils with very short leads–the kind they leave out in the VPL. The suction seal on the pencil sharpener is broken so it's a 2-person operation - one to try to hold the sharpener steady on the countertop, the other to sharpen. There a rack of forms so I took some to draw on the back.

Breakfast: muffin, hash browns, vegan meat ball, coffee, grape jelly, powdered creamer, margarine,  ketchup, 3 teabags, sugar, and a cup of almond milk, and a slice of white bread. The sachets of condiments and tea are for the entire day. We can put our bread in the toaster in the unit. The "meat" ball was v good chopped up and stirred in with the potatoes and ketchup. I saved my margarine from breakfast to put on my lips and hands–Joy! Thanks to reading about that in The Handmaid's Tale. Must tweet Margaret Atwood and thank her.My clothes: very cheap black & white runners with velcro straps. I'm wearing size 10 because 9s are too small even though I normally wear 8.5s. Chose not to take the sports bra which has a wide uncovered elastic–too tight and nasty.  Dark green sweats: 2 t-shirts, 2 pairs sweatpants, 1 sweat shorts. 3 pairs synthetic black socks

Other inmates polite and friendly. Very civil, in fact. Lots of please, thank you and sorry. Much better than my experiences of being in school, group home, or blue collar jobs. Quite a few seem to be mothers. One is 8 months pregnant and her baby is kicking a lot. She and another woman talked about labour over lunch which I was interested to eavesdrop on. My meal was 2 slices of white bread, idiocyncratic but not unpleasant hummus, veg barley soup, orange, coffee, powdered "juice." Delighted to get hummus.
Guards are called Ms. This afternoon's is Ms. Mendoza.

Was called to see the nurse to be trained on how to administer drug to a person overdosed on fentanyl, and also got a flu shot. Everyone who comes to the prison is gven an overdose kit to take home with them in case we come across an unconscious person. Many people are dying of drug overdose theses days. I asked for vaseline and she gave me a generous dab in a little paper pill cup. Even more joy!

There was a wind storm last night, so we are running on a generator. The TV is not working because of it, which is disappointing because there was an ad for Vera on the knowledge network. Must be one huge generator to run a prison.

Put in a request on a white form for a 2nd mattress. Fingers crossed for tonight. In the meantime I made a pad of my 2 blankets which helps. Slept in my clothes in lieu of blankets.

Monday Feb 13
Home again.  I want to try to enjoy the snowy morning, catch up on my work and try to shake off this depression.

Nasty experience this weekend of being yelled at by guard. No one tells you that if you don't turn off your bright light by 11pm it stays on all night. I was trying to read as late as possible to make myself sleepy. I tapped softly on the window in the door of my cell to get her attention. She came over told me angrily to never tap on my door again unless it's an emergency and too bad about the light. 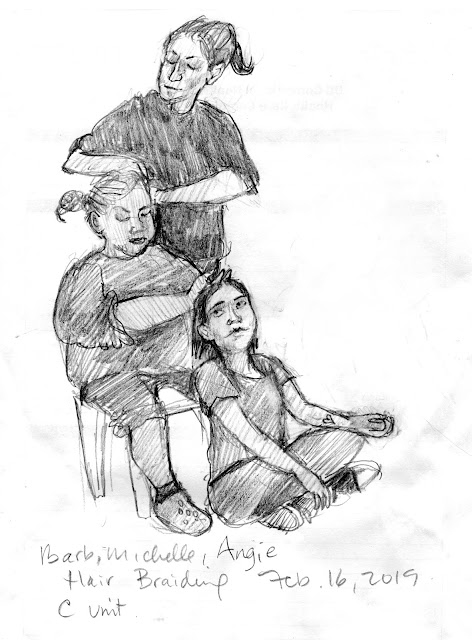 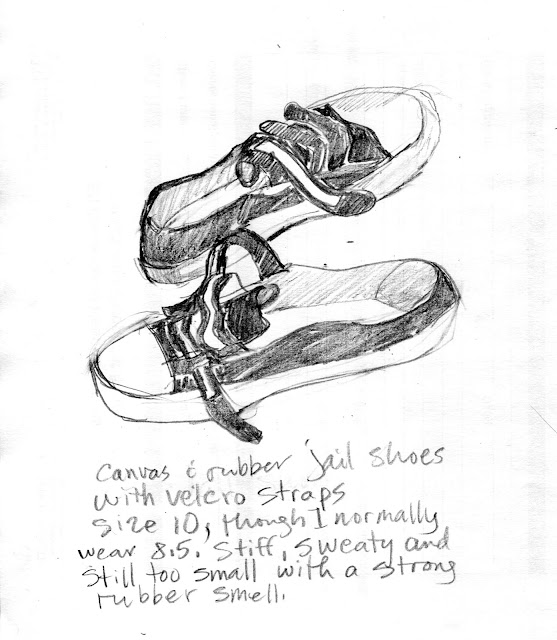 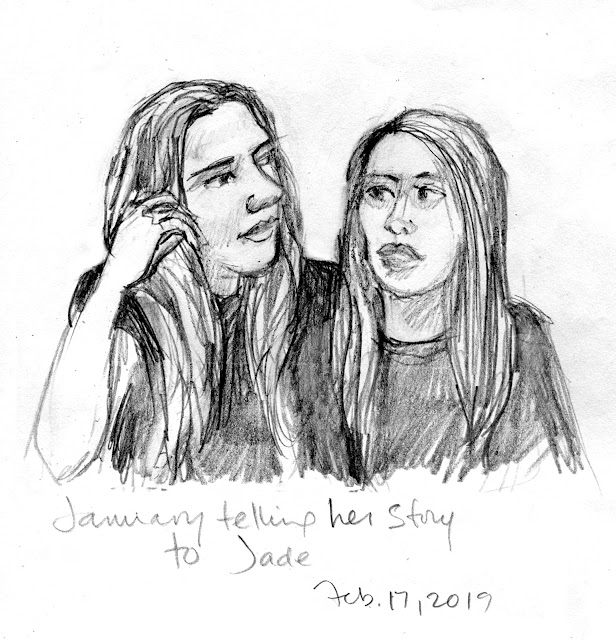 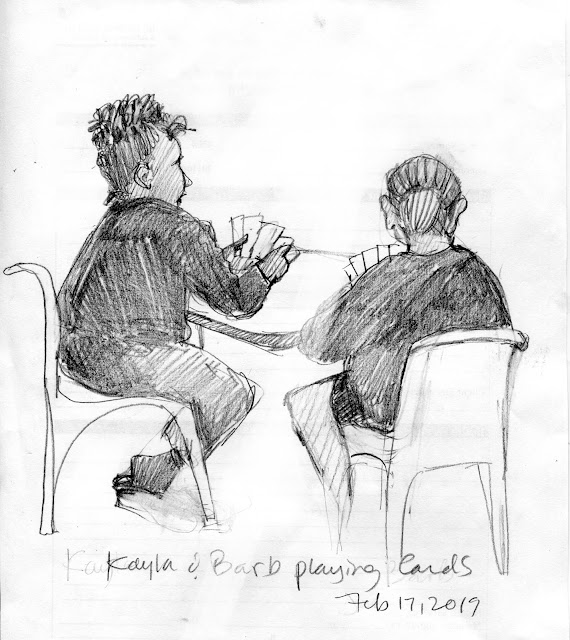 When it was time to go the guard got angry at me because I wanted to check my purse before signing that I'd received my belongings. You're supposed to sign you've received them before you receive them.  Then I was body-searched by a guard who dug her fingers into my flesh all over my whole body, especially my armpits. It was awful.

Feb 22
Back for my 3rd weekend at Alouette Correctional Centre for Women. The frozen "stir fry" was actually inedible. It must have been in the freezer for a long time because it took 8 minutes in the microwave for the rice to thaw. But that time the vegetables were disgusting. No tofu and no flavour whatsoever. But someone gave me a cookie and someone else gave me teabags. My guess is the cookie isn't vegan, but I'll go hungry if I don't eat it. New selection on the book cart, so I grabbed 3 and copied won likely shows from the Province TV listings at the guard station.

Saw a third nurse in as many weeks who was also nice enough to give me some vaseline. People who become nurses, like those who become librarians and kindergarten teachers, are mostly kind. Lockup isn't until 630 but I don't feel sociable. I was told Michelle got out this morning. I met her in the van going out to the prison when we were all in cuffs and shackles. She was drug sick. Now she's gone back to the downtown east side. I hope she does okay, but it will be tough.

My shoes are too small. Another woman is shuffling around with her feet hanging out of hers too.  Should have taken the jumbo size 11s. New inmates are very young. A zombieish person with black stubs for teeth "from drug use." Hard to understand what she's saying, but she doesn't say much, just sits beside me wherever I go. Another toothless person is pregnant–a very nice person, she gave me teabags. She's hoping to get into a treatment centre which the others say are very pleasant compared to here.

Woke up every hour. The second mattress is worn paper thin in the middle so doesn't help my hips.  It's weird to sleep with a t-shirt over my head to keep out the light. I don't undress because I'm using one blanket to pad the mattress and the sheets won't stay tucked in, just slide all over the plastic mattress. Plus I just feel more secure with my clothes on. Switched to the dimmer light at 630 because I didn't want to accidentally have the bright one on all night again.