It's been a tough year: one of financial and health struggles, sobering realizations and transitions.
My Bully by Laura Langston has been cancelled by Fitzhenry and Whiteside. Last year the company fired its publisher and editor and hired new people who decided My Bully wasn't the right book for them. It had been a massive project for me and the final line drawings and text and layout design completed when the book was put on hold and finally dropped. 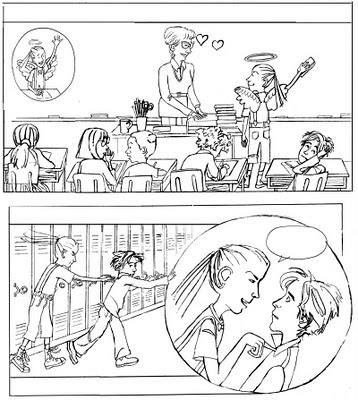 I did manage to finish Fred and Pete at the Beach, I want to Go to the Moon, and Somebody cared for a Flower in the last year and a half. I spent the last 6 months on the latter two, as well as working hard on developing the 3rd Mister Got to Go. I had to borrow
money to keep going because the advances were so low or delayed in coming. At the end of six months, I ended up in emergency with an inflamed neck disk from hunching over art and the computer, plus the stress of the deadlines, no money and Emma's kidney failure. My doctor and my physiotherapist said there was no way I could go back to working like I had been in order to complete Mister Got to Go Where Are You? by Sept 15, 2010. When I phoned Orca to tell them I couldn't finish by the deadline and wouldn't know for a month when my back would allow me to resume working, they cancelled the book. It's too bad - the roughs had just been approved. I think it was Lois Simmie's best Got to Go story. What's also hard is that Orca wants their advance back. 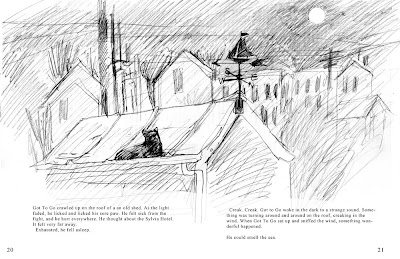 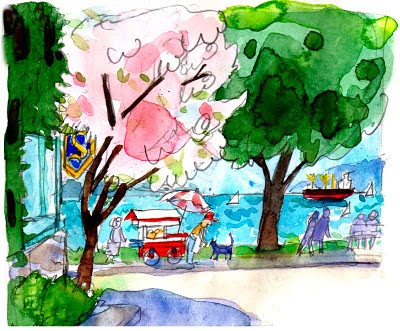 I started to realize last fall that I couldn't go on trying to complete illustrations to deadlines that were too demanding for me while not earning nearly enough to live on. So after some exploration, I've decided to go back to school and do a Masters of Children's Literature at UBC with the hope that I will be able to find a faculty position at a college. MACL at UBC has been very welcoming to me which has been such a pleasant surprise. I start this September.
So, fingers crossed.
Posted by Cynthy Nugent at 10:49 AM No comments:

Labels: cynthia nugent, Fitzhenry Whiteside, illustrator's health, Mister Got to Go Where ARe you, My Bully, Orca

My first attempt at animation. Watch for the dog's breathing at the very start.

To do this animation, I started off with a scanned image of one of my paintings that had a series of photos of dogs with painted wings collaged onto it. Then I used cut, paste, and cloning in photoshop to get a bunch of little dogs and a background empty of dogs to work with. I used the animation function in photoshop to move the dogs along their journey from the sleeping dog's brain to Sirius, the dog constellation. I saved this as a series of AVI files rather than have one gigantic file. I opened the AVI files in imovie where I spliced them together, and added music and titles.

This is kind of clunky but in doing it I learned a lot and think I can make the next one a lot smoother. I'd like to try to make an animation of my book, When Cats Go Wrong, next. With its accompanying song, flat backgrounds and simple figures, I think it's a good candidate for this method.

Posted by Cynthy Nugent at 9:09 AM No comments: 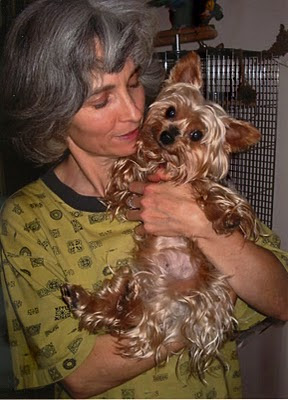 My beautiful, beautiful little Emma died on June 14, 2010. She had kidney failure and was on IV fluids at home for the last month. Emma was the model for Arnie in Mister Got to Go and Arnie. She was 13 years old. 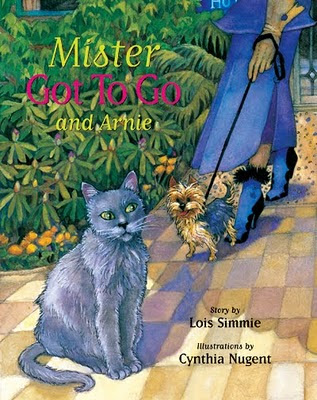 She was an elegant, polite, and loving dog. Always gentle. When she could still hear, she was an excellent guard dog. She liked to chase squirrels and play with her toys. I took her to work every day for the 8 years I worked at the Botanical Gardens.
I am heartbroken to lose my loving companion.
Posted by Cynthy Nugent at 2:22 PM No comments: 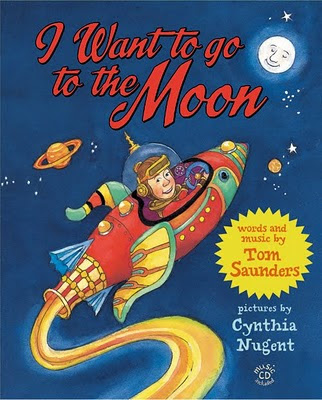 Just checked out the catalogue on the Simply Read website and was delighted to see the cover Elisa Gutierrez has designed using my art. I was very inspired by early thirties Buck Rogers comics and toys and I am really pleased to see she picked up on that with the font she chose and kapow-shaped decal. The catalogue says the book is due out in October.
Posted by Cynthy Nugent at 2:13 PM No comments:

Somebody Cared for a Flower 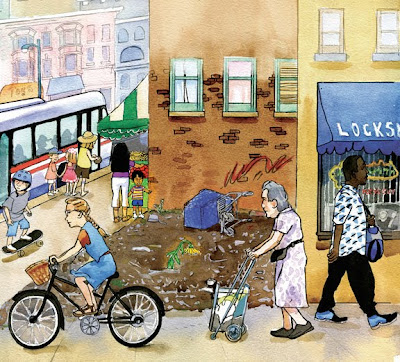 Just finished illustrating a 12-page early reader for Scholastic Education called Somebody Cared for a Flower by Laura Peetoom. It is a really well-crafted story told in very simple words about the gradual transformation of a drab vacant lot to a beautiful community garden. 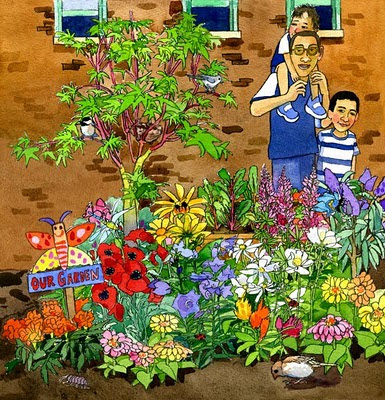 Fortunately I'd been a volunteer in the Blooming Boulevards community garden project in the Dickens Community and had also worked for eight years at the UBC Botanical Gardens so knew a little bit about that process and the kinds of plants you might see in a community plot.
This was a work-for-hire project which means you are paid a flat fee instead receiving an advance against sales followed by royalties if you earn out your advance. It's a good way of earning a fast chunk of money if you can work within the the tight schedule. It's the 2nd reader I've done for Scholastic.
I haven't heard yet when they expect the book to come out but it will only be offered to schools in packs of six for the classroom.
Posted by Cynthy Nugent at 1:47 PM 1 comment: