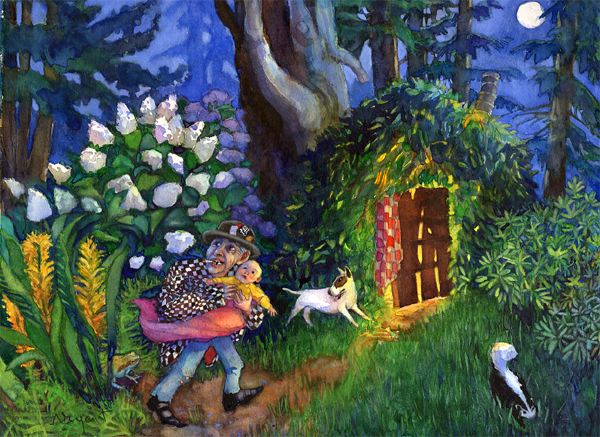 A roundup of fiction based on the fairy tale Rumpelstiltskin put me in mind again of my interactive art exhibit, Rumpelstiltskin's Cupboard. Here is my watercolour that revisions the tale and my accompanying wall text:

Once there was a merchant who boasted that his daughter was so fabulous that she could even spin straw into gold. The greedy king hears of this and sends for her. He puts her in a room with some straw and says, "If this is spun into gold by morning, I’ll marry you. If not, I’ll kill you." He closes the door and she bursts into tears as she hasn’t the faintest idea how to do it and wishes her father wasn’t such a blowhard. Suddenly a weird little man appears and does it for her in exchange for her gold ring. He ends up having to bail her out three nights in a row because the king is so greedy. On the third night he asks for her first child in exchange. At this point, nowhere near pregnant and desperate, she agrees. So the king marries her and when the baby is born the weird little man pops up again. He won’t be dissuaded from taking the baby unless she can guess his name. She sends her courtiers to scour the kingdom and by accident one sees the little man dancing around a fire in the forest singing his name. "Is it Rumpelstiltskin?" she asks, which is correct. This makes him so furious he tears himself in half. The end.

This is a strange story. It equates babies with gold. It made me think about people who steal babies, and not those poor demented women who crave a child of their own and steal someone else's. This is understandable but there are other people who abduct and kill children. Why? I wondered if it is because babies are of such indescribable value. Whether it is an act of envious revenge against the world by individuals who felt they’d been shut out and deprived of the good things of life that everyone seems to have. In this piece I’ve shown Rumpelstiltskin as a crazy angry misfit who lives in a shed in the woods. He has snatched a treasure and is rushing home to gloat over it. But he will find that he can’t count it like a bag of money. A baby is only a treasure if you love it. He has impoverished others but not enriched himself.

Posted by Cynthy Nugent at 12:10 PM No comments: